When you're living on a boat like Livia and Carol and cruising the world aboard s/v Estrellita 5.10b, space is at a premium. Having things do double duty is a good thing, especially where stowage is concerned...


When we were preparing our boat (and selves) for cruising we watched all of Lin and Larry Pardey’s videos (and read all of their books). The inspiration for these pillows came from one of their videos. I can’t remember which one so you’ll just have to watch them all and figure it out for me ;)

In the video, Lin shows some pillow cases made in a velvet-like material that she used to stow fabric items, like sleeping bags. I thought to myself “Brilliant!” and enlisted my sister-in-law to not only make us slip covers, but also to make us pillow covers. 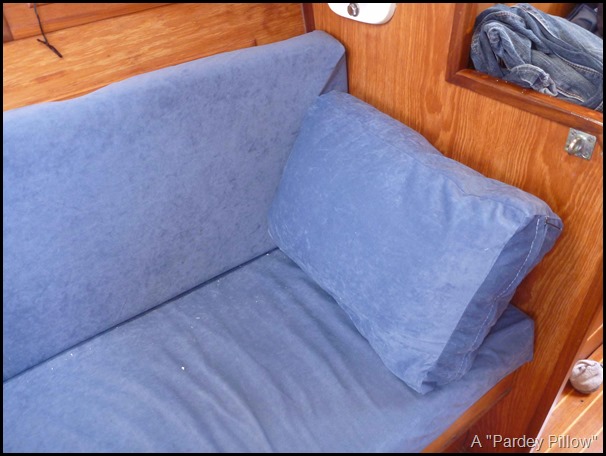 My very, very nice sister-in-law did an excellent job but I chose a crappy fabric for the pillows and so even though the slip covers she made looks like new after 3 years of hard cruising, the pillows were disintegrating and the cotton fabric had absorbed salt air and humidity from the start.

Tip: The Crypton Suede we bought for the slip covers, and used in this version of the pillows, is almost indestructible. We’ve spilled wine, coffee, etc on it. Rubber our salty, sunblocky skin all over it. More than three years cruising in the tropics and each time we machine wash the covers, they come out looking new again.

I used the exact same Sailrite video/pattern that I used to make the cockpit cushions. I measured out panels of the Crypton Suede (Curaco) 14” x 20” and used 6” as my width. I didn’t bother adding for seam allowances because I didn’t care what exact size the pillows were, just the approximate dimensions. I also put the zipper on the small end of the pillow this time so it makes them more comfortable to lay on while watching videos.

We have 4 pillows: one for towels, one for bedding, one for sleeping bags and one for everything else. When we go between laundry for a long time, the pillows can get half-empty and if it bothers us, I’ll consolidate – putting one pillow and its contents inside another.

And there you go. Hidden storage, comfy pillows, and linens that don’t smell (too much) like “boat”.

Posted by Robert Salnick at 6:00 AM 0 comments

This post originally appeared on Windborne in Puget Sound

In 1978, when Eolian was built, LED's were an expensive novelty.  Therefore the lamps on her control panel that indicate the presence of shore power, generator power, and correct AC polarity were the tried and true neon lamps.

A neon lamp is a stupid simple device -  a glass envelope filled with low-pressure neon and containing two closely-spaced metal pins.  It will light up when presented with 110V, drawing a vanishingly small current (400 uA).  But they don't last forever.  Eventually they grow dim and begin to flicker.  And then finally they go out.

I had replaced the shore power neon lamp in the power panel in our first year of stewardship of Eolian.   It's the one that is lit the most, and therefore was the first to fail.  And, coincidentally, it's the only one that is somewhat easy to get at on the inside of the panel.

After 15 years, it had failed again.

But now LEDs are common and cheap.  I found these, designed for direct connection to 110V, on the Internet for a couple of bucks apiece.  Installing them was not easy.  The back side of the power panel is quite crowded, and it was apparent that the original lamps came with the panel and had been installed before any of the wiring.

I did the deed at anchor, with the generator and inverter off, so there was no 110V present to worry about.  I got them in, but I had to take an Excedrin afterwards to deal with the cramps in my shoulder.

Hopefully they will last longer than the neon ones.


Posted by Robert Salnick at 6:00 AM 1 comments

New Shelf for the Cockpit Locker

Jeff and Anne continue the complete refit of s/v Pilgrim. Adding organization to the storage in the cockpit locker is a part of that refit...

Adding a shelf outboard along the hull in the cockpit locker will provide some additional storage possibilities and a platform on which to mount the refrigeration compressor.
The fore end of the shelf will rest upon the top of the new bulkhead.
Tabbing a ½” plywood panel to the upper, aft interior of the cockpit locker (upper, left in image above) allowed me to easily attach a bracket to support the aft end of the shelf.
The shelf will be tabbed to the hull along the outboard side thus another round of grinding to expose the fiberglass hull.
I am eager to be done with grinding fiberglass inside the boat.  It creates a huge mess and fine dust spreads throughout the interior.
We created the new shelf using the 1/2” prefinished birch plywood.

Unfortunately the nice finished surface must be ground off in the areas receiving tabbing.
We installed a 48” X 6” strip of 1708 cloth .  The tabbing stiffens and strengthens the shelf significantly.
Next, we applied two coats of primer and two coats of paint to the shelf and the upper sections of the cockpit locker.
Our plan is to mount the refrigerator compressor near the aft end of the shelf.  Then install one maybe two vents in the cockpit side wall to provide the unit with fresh air. The forward end of the shelf will store cleaning, maintenance, misc supplies in plastic bins.  To keep the plastic bins in place while the boat heels we added a tall fiddle along open face of the shelf.
Next up is installing the engine access panels and plumbing the lower and middle bilge pump discharge hoses to the drain manifold.

Posted by Robert Salnick at 6:00 AM 0 comments

Over on s/v Cay of Sea, Rick and Ruth go to work sheathing their dinghy with fiberglass.  Why do this?  Well, it is a way to extend the life of a wood dinghy, and the fiberglass takes running up on sand and gravel much better than does wood.


I filled more small splits with peanut butter-consistency epoxy on the bottom today. These are super small splits – just narrow cracks – I forced epoxy into them with a putty knife, filling with cross-grain motion, then scraping up excess with the grain. Had I prepped the bottom for glass and resin, I could have gone directly to sheathing without waiting for resin cure. But I didn’t think it through, and needed to solvent wash the surface first and grind a few patches of cured epoxy. After letting the crack fills cure, I finished the prep.

[Editor's note:  for those of you that have not worked with epoxy, as it cures a substance is pushed to the surface, called the "amine blush".  If this is not removed before anything else is applied, it prevents a bond from being made.]

Draping the glass over the bottom showed me where to trim the excess, and where likely relief cuts were going to be needed: at the keel, in the corners, and a couple of places on the transoms I didn’t anticipate. It’s easy to push the weave of the fabric around while it’s wet, but care has be taken to keep pockets of void from pushing up as a result. Relief cuts are the best way to get the fabric to lay flat.


A large squeegee or putty knife/scraper is the best tool for wetting out on horizontal surfaces. It was a beautiful day – about 70 degrees – but the sun shining on dark surfaces made them warm, and consequently the resin set up pretty quickly. I had ample time to wet out each section, but I still had to move quickly. I spread out the resin and thoroughly saturated the weave, then quickly replenished my resin container. Three pumps each of resin and catalyst provided just the right amount to spread at one time. I used about 20 ounces of resin and catalyst to saturate the whole surface, including transoms.

I switched to a chip brush for the transoms and turn of the bilge, as pouring the resin wasn’t going to work on vertical surfaces. After an hour’s steady work, the entire surface was done and beginning to cure in the sun. I’ll do an additional coat tomorrow (or next time, depending on weather).  One more coat will serve to completely fill in the weave pattern of the fabric, and provide a smooth surface. When I removed the boat from its elevated supports, I could readily feel the increased rigidity the glass and epoxy provides. The transoms will get even more rigid when I glass their inside surfaces.


Posted by Robert Salnick at 6:00 AM 1 comments

Display all posts tagged with: